Here at How To Get Back Your Ex, we will be analyzing a range of topics about breakups, relationships, and similar topics. Since the theme of this site is about getting back your ex, we thought the best place to kick off the blog content is about breakups, and specifically, getting dumped.

There can be countless possible reasons someone says they are dumping their significant other. And I’m sure that most of them are believable.

You get the picture. All of these are excuses. Well crafted excuses perhaps, but excuses nonetheless.

While this applies to men and women equally, the true reasons for dumping someone differ between the two genders. Let’s start with the guys, and we’ll revisit this from the woman’s perspective on the next post.

When you take the cop outs, the spin, and the overall bullshit out of the equation, here are the real reasons men dump women in the vast majority of situations.

You Thought You Could Change Him

Although it’s a known fallacy these days, it amazes me to find how many relationships falter because the woman thought she could “mold” her man into something other than what he is.

I’ve had female friends even say things like, “He’s a good foundation for the perfect man,” or “Just wait until I teach him [insert whatever she sees as important].” Or the always great to hear, “I’ll turn him into a quality husband, you just watch.”

Can a few rough edges be cleaned up, maybe by learning matters or etiquette? Sure.

But can you turn him into a completely different person? Not a chance.

Try to force a major change? Any man worth his salt will turn tail and run at some point. If he isn’t confident enough to know when to say when, you’ll eventually lose respect for him anyway.

Love who he is. Accept who he is. If you have your sights set on morphing him into some knight in shining armor, you might as well just keep looking for someone closer to your vision of perfection. But also know that you won’t find that guy. No one is perfect, so be realistic, or he’ll leave and won’t look back.

You Put Too Much Pressure On Him

Men like to think they are in control of their own destiny. When it comes to marriage or commitment, he will want to initiate it himself.

But the age old story is about the woman who pressures him into a commitment or getting engaged. A lot of women think that’s how it goes. They think men won’t do it themselves without pressure.

Those women are misguided. If a man loves you, truly loves you with all his heart, he’ll want to commit to you. Eventually he will want to marry you.

There is a lot to be said about letting the story play itself out. Give him a chance to be a man and dive in himself.

If you have a man who won’t commit, you should really be questioning whether or not he is the right one for you. A man that lacks the desire to commit either really isn’t that ‘into you’ in the first place, or has some deepset psychological issues to work out.

Why in the world would you manipulate your way into a relationship with either of those guys? Have some self-respect and don’t do it. More often than not, it will end badly for you.

You Lost Interest in Sex

Men and women view sex from completely different angles. To a woman, sex is great but more about connecting than a physical release in many cases. For a woman to be interested in sex, it often requires a feeling of closeness in advance.

Men are the complete opposite. Sex is not only a nice to have, but a must have for a happy relationship.

Men aren’t typically as in touch with their feelings. They can also be more guarded with those same feelings. Because of this, sex actually plays an opposite role for them.

Men feel closer to you when the two of you are sexually active. It might sound far fetched, but it’s a fact. This is one of those truisms, a’la Men are from Mars; Women are from Venus lore.

So to a man, a relationship where the sex has soured or gone dormant is a dying relationship. It’s a cause for alarm, and a great reason to run for the hills.

So take note – if you lose interest in sex, very few strong, confident men will stick around for you to warm up again. Most of them see it as a symptom of a dying relationship, and will react accordingly.

He Met Someone He Thinks Is Better For Him

This is a tough one. Maybe it’s caused by him never really being into you in the first place. Maybe the two of you stopped being able to communicate. Or maybe you just weren’t a perfect match at any point since you met.

It’s also a situation where you may be stuck with moving on, no matter how you feel about your ex. If he meets someone who grabs his heart and enamors him, you may find yourself unwillingly single again.

It can even happen in seemingly perfect relationships. Passionate love affairs have fallen apart because of this. I’m not saying this to make you feel insecure, or that any man can be stolen with a flutter of eyelashes and a flash of skin.

No, sometimes a man will have an epiphany that what he really wants and what he already has don’t line up. It could take you by surprise. But I’d bet he always knew it wasn’t the perfect match and just didn’t tell you.

So communicate…a lot. From Day 1 of the relationship. Ask him what his dreams are, what makes him happy. Really get to know him. Don’t let him run away emotionally or hide his true feelings.

If you really know him, you’ll figure this out before you get hurt. It’s better to break amicably from a loving relationship that just isn’t right. The alternative is that one of you gets hurt, and that will always sting for the one who ends up out in the cold.

Men can give a range of reasons why they dumped you, but in the end, there are a few themes that pop up more often than all other reasons combined. If you were dumped, think long and hard about which of these might be at play. Then consider whether the reason is one that can be addressed and gotten past, or whether it’s really an indicator that you are both better off with someone else.

There’s more to consider, so if you are still trying to figure it out, download our free ebook today. That will help you get all the cards on the table to decide if you really do want to get your ex back.

Our next post will look at the list of reasons women dump men. Come back and check it out when it goes live in a few days.

Tommy Landry
Tommy P. Landry is a certified master life coach, internet marketing consultant, WordPress expert, and entrepreneur with over 25 years of business and marketing experience, as well as a degree in and lifelong study of interpersonal communications and relationships.
http://tommylandry.com 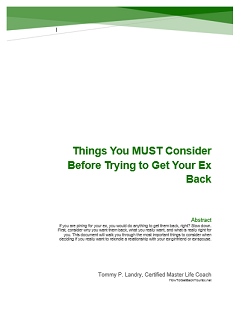